I’m down to the home stretch. I can see the light at the end of the tunnel. Only a few more days in this vegetable desert! But for now, I’m still here, and I’ve gotta eat. So I’m still trying to mix things up a bit. Though at this point, everything is starting to taste the same.

My mouth is watering as I think about what’s coming. My friend, whom I’m walking in this desert with, will be cooking cheesy chicken enchiladas to celebrate the end of our diet. You better believe I will thoroughly enjoy them! I can almost taste their melty gooey cheesy goodness right now! I will, for sure, include a recipe for my own cheesy enchiladas when I make some for myself. As absolutely delicious as they are, they are extremely simple to prepare. You can watch for that.

For now, seeing as how my culinary canon is still in effect, I’m going to attempt to recreate a staple of any family’s dinner menu – spaghetti. “But you can’t have pasta!” you might be screaming right now. And you’re absolutely right. This is why I’ll be utilizing the often overlooked spaghetti squash!

For those of you who don’t know what this is, the spaghetti squash is an oddity of nature. When you slice this squash in half and bake it, the flesh of the spaghetti squash comes apart in strands, resembling spaghetti noodles, and it has a slight buttery flavor. It still has the texture of squash, but if you close your eyes and imagine real hard, it’s almost like eating real spaghetti. It’s a great spaghetti substitute for those who are vegans, alergic to gluten, folks on a low carb diet, or even for those looking for a healthy and light alternative to the high-calorie traditional spaghetti.

It’s good with a little butter and Parmesan or Romano cheese, and an Italian meat sauce. Since I can’t partake of any of that, I’ll have to settle for a tasty homemade marinara with mushrooms. And instead of meatballs, I’m cooking up some chopped zucchini and yellow squash. … O meat, how I miss you so! 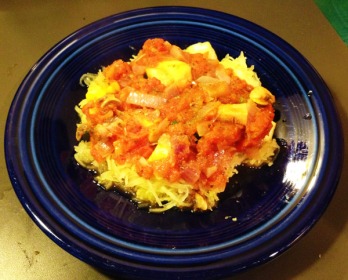 As it turns out, this is one of the better meals I’ve prepared during this diet. I think it ranks up there with my quinoa lettuce wraps.

One of the guests at our Monday night group – the event for which I prepared this delicacy – told me that no one has ever convinced her to eat squash before (she’s not a fan apparently). She liked this dish though, which is surprising, seeing as how it’s made up almost entirely of squash. It just Goes to show you that with the right combination of flavors and textures, you can turn anything into a delicious meal! Though she did pick out all the mushrooms (apparently not a fan of those either)…

If you’d like to try your hand at this squashy spaghetti facsimile, you can find the recipe in the recipes section of the blog.

I was not feeling particularly led to cook anything today. Not really. I already have a couple sets of leftovers from the few previous meals I’ve cooked – all of them delicious – and there really isn’t a need. There’s that, and there’s also the fact that I’m still making my way through my self-imposed fruit and vegetable desert. When you can’t cook what you really want, the desire to cook is somewhat diminished. But… I figured since this is still a budding little blog, it would be a good idea to do something. So I thought, what can I cook that requires the least effort, but will still be worth sharing with all of you.

Long story short, I cooked up some black beans and rice with avocado & mushrooms. It was alright, but it wan’t great. I plated it and tried to make it look nice and pretty, and honestly, for as simple as it was, it tasted pretty good. But the reality is, when all you really want is a bowl of fruit loops & milk, a plate of black beans & rice really doesn’t do much. You know?

So I finish my meal and get on my computer to check email and I see that one of my fellow food bloggers has posted a new recipe. I like to see what other cooks in the bloggosphere are up to, so I checked it out. Given the disappointing experience with tonights dinner that I just recounted, this was a poor decision.

I click on the link to go to her blog, and she has posted a recipe – with pictures – of Red-Lobster-style cheddar biscuits! WITH PICTURES!! Oh my word! I thought my beans and rice didn’t measure up to fruit loops. Put it up against those lumps of baked cheesy goodness, I might as well be eating mud.

Anyway, now that I’ve really sold you on MY creation, if you’d like to try it out for yourself and draw your own conclusions, you can find the recipe in the recipe’s section of the blog.